Posted on June 1, 2016 by melissabirdwell 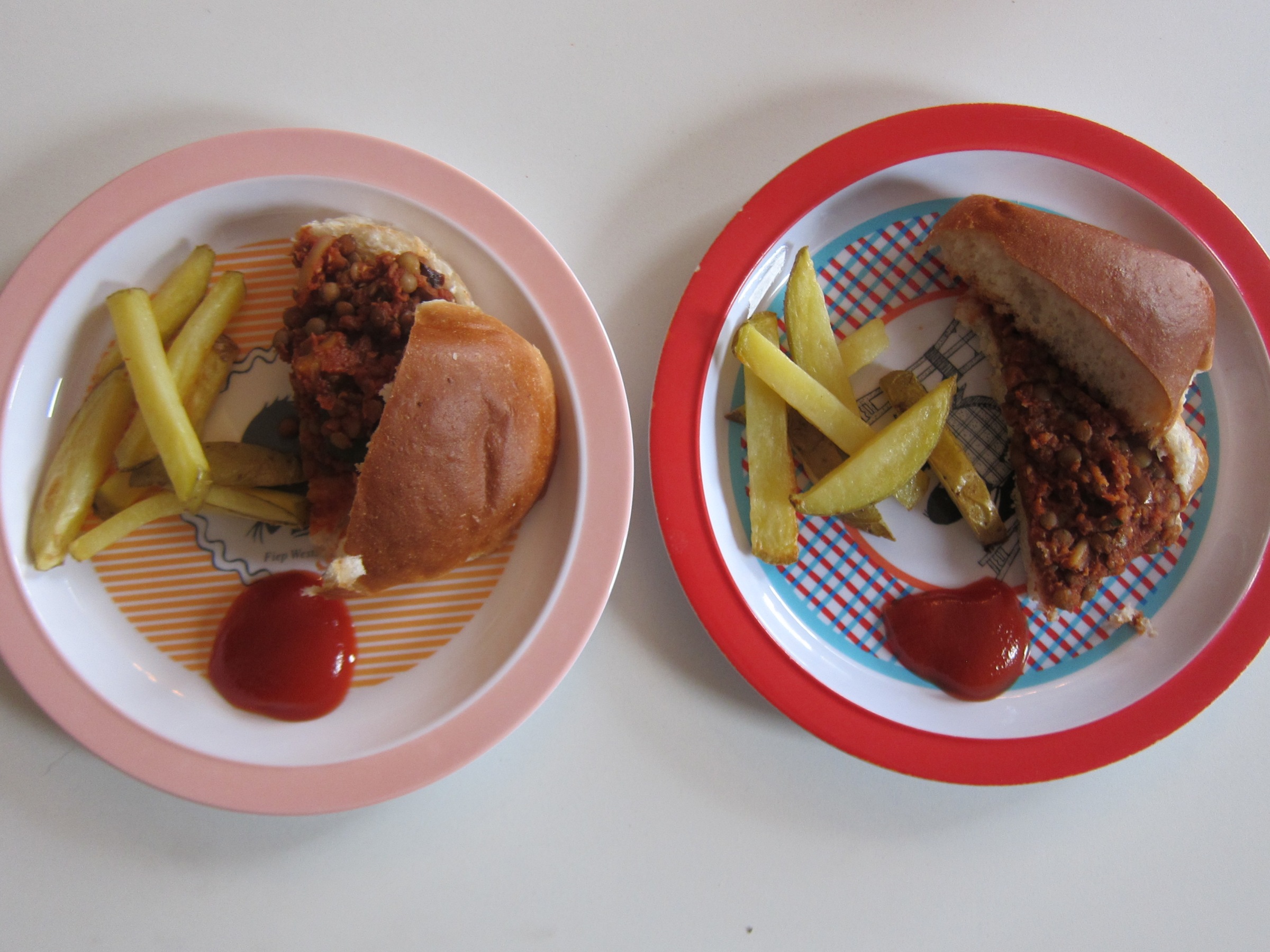 Another Wednesday and another quest for me to give my kids a chance to get involved in cooking dinner. Although I started this little adventure with the hopes of giving my kids a better understanding of food and hopefully help them make better food choices, I have discovered I am looking forward to cooking with them (only one day a week because much more would make me crazy). They love helping me in the kitchen so much! They measure and stir and pour. Of course they also spill and smear and fling and giggle (hence only once a week). It’s really fun, though.

Tonight we made Vegan Sloppy Joes and Homemade French Fries.

These were really good. It was a total experiment for me and I’m so happy with how everything turned out. To be honest, though, it’s been so long since I have had the “out of a can sloppy joe” of my childhood that these could taste completely different. I can’t be sure. All I know is that they were delicious!

To get started:  I put the lentils into water and let them boil. Then I gave the kids some new stickers. They saw me go into the kitchen and started jumping around like crazy little people, My son screaming “lets cook” and my daughter screaming “wawabe big helper” (she is only 1 after all). I needed them close enough to watch me but out of the way while I cleaned up the snack mess and did some other prep. Stickers are amazing things.

First I cut 2 big potatoes into strips and put them into super cold water. Make sure they are as close to the same size as possible. I used to have a super cool mandolin that would do this but I don’t know where it went. Probably lost in the great move to the Netherlands like so many other things.  You put them in water to soak out some of the starches. This will help to keep them soft and not chewy. In the end they soaked for around 45 minutes.

Then I cut up half of a bell pepper and found all of the other stuff we would need. and preheated the oven to about 200 c. 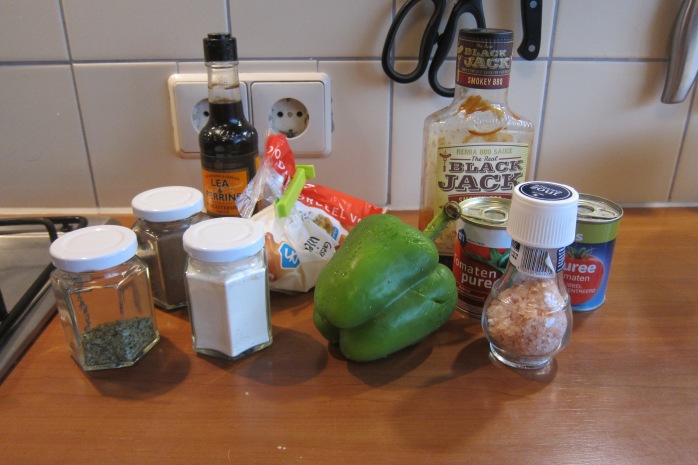 In come the kids!

I put the bell pepper and onions into a skillet and sauteed them while the kids made the “sauce”. They added and stirred everything in a separate bowel but it would be easier just to put everything directly into the sauce pan, if your goal isn’t for the kids to help. 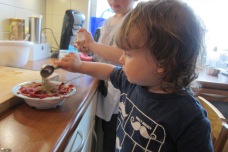 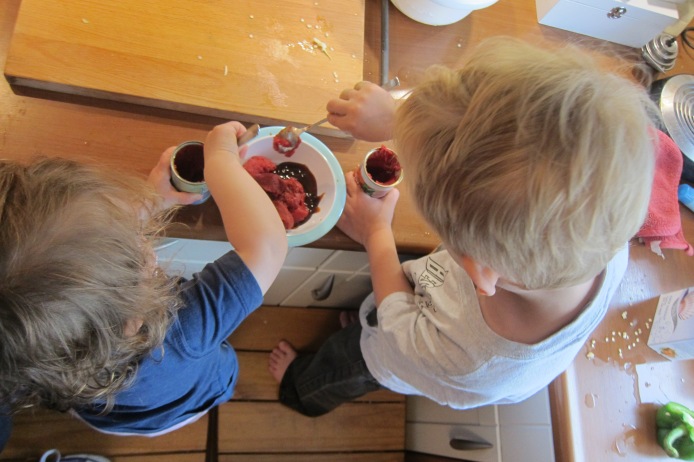 Then I added the “sauce” they had made to the pan along with the lentils and gave everything a good stir. 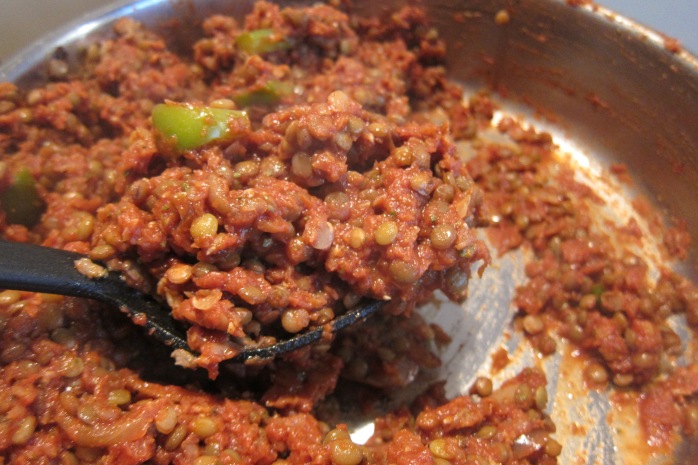 A note on the lentils:

I used 2 different kinds because I wanted the different textures. I wanted the red lentils to get a little mushy and the brown lentils to hold their shape and give the meal texture. This is also why I cooked them in the same pot. I knew that the red lentils would get done first and then get a little mushy and I think that’s fine. It worked out very well and saved an annoying extra step.

So that was done and it was time to get the French Fries going:

While the fries were baking I had the kids wash their hands and in “kid speak” this means play in the water until everything around you is drenched. This is just a little explanation about why the kids had no shirt on at dinner time. I just couldn’t bring myself to dirty up another set of clothes for the pictures! 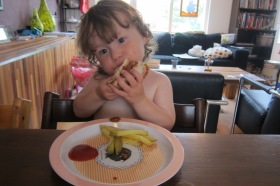 My daughter devoured everything, but she is awesome like that. My son ate all of his french fries but refused to even taste his sloppy joe.

“you should try it”

“but you made it, you should at least try it”

“yes but you also made the sauce for the sandwich. remember? ”

“well if you made it you need to try it. If not, you won’t know whether you made it good or bad”

We did settle on him taking 1 bite and he said he liked it but didn’t want any more.

At least we had fun. And everyone else in the house loved them. My husband said they were great and ate 3.

So we will do it again next week.

Want to see how the adventure has progressed?

Getting the Kids Involved in Cooking Dinner: Week 2. Black Bean and Chickpea Flautas

Getting the Kids Involved in Cooking Dinner: My New Mission