Beer Yoga in the Park

Posted on July 3, 2018 by melissabirdwell 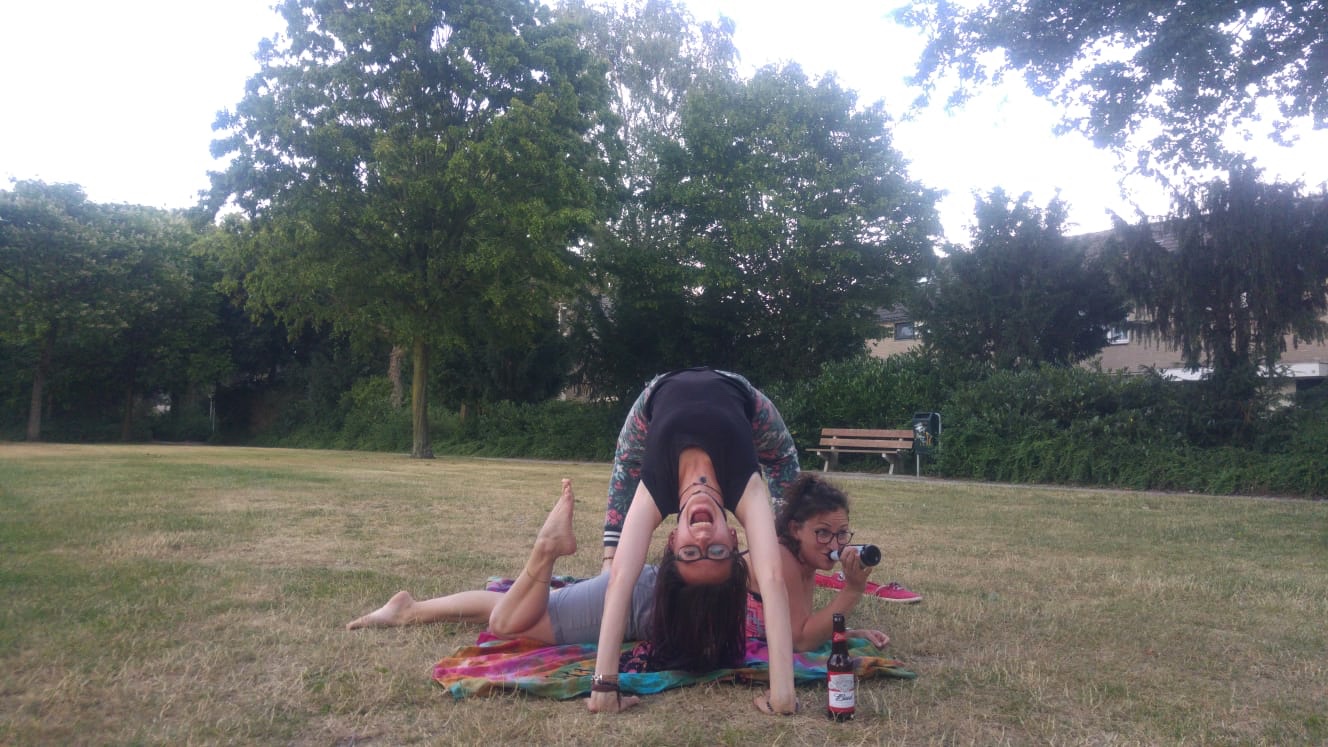 What happens when you put two gym rats in the park with beer? Beer yoga. It’s something you never knew you needed until its there and then it completes you.

So a bit of background: My dear friend Marta and I used to go to yoga every Monday night. Lots of reasons why we s

topped. The class started at 9:00. The weather was far to pretty to be inside. And to be honest, it got a little boring. So we started to meet in the park for some nibbles and beer, and hopefully some yoga or other sport.

Really, we just wanted to work out a little so that we could justify the fact that we are skipping yoga. Like “We totally aren’t skipping yoga, just moving it outside” but then we keep bringing beer… so beer  happens. Then beer yoga happens..

I have seen adds on Face Book about yoga studios combining these two seemingly incombinable things and I have always loved the idea. Why shouldn’t working out be fun?  I don’t find yoga particularly fun, to be honest. But in the same way that I really don’t enjoy Pilates. Slow repetitive movements tend to bore the crap out of me. I get

distracted and end up mentally preparing my grocery list and getting more and more annoyed that everyone seems to be better at this than me. I totally understand the health benefits, though. Yoga is great for you body (as is Pilates) and I saw a real improvement in myself when I was going regularly. The park, however, kept beckoning me to drink beer and enjoy the summer. I would have been happy to just do that but Marta insisted that we, after 2 beers, should do some yoga. I’m always down for some silly time so I gleefully agreed and I’m so happy i did. I’m so happy she insisted. And as I have said before I’m so glad she uses her powers of persuasion for good and not evil.  It was so freaking fun! I learned that I am much more flexible after a few beers but my balance is compromised, no real surprise there! I’m also happy that Anouk was there to capture these moments on film and make fun of me relentless because I split the back of my skirt open during the beer yoga. It was an old skirt but I liked it. The worst was having to get home with my butt literally in full display (I’ll spare you the pictures that were, of course, taken). Oh well, I’m sure this wasn’t the first clothing malfunction resulting from half drunk yogaing. Or maybe it is!

So, this should totally be a thing! The next Vegan Picnic in the Park is scheduled. Anyone know of a yoga instructor who wants to come drink and do some yoga with us? Or, another idea: If Marta and I organize a beer yoga in the park would people actually want to come and be silly with us? Let me know!

Want to read about other silliness Marta and I get up to?Of course you do!!

Vegan Potluck in the Park