Posted on October 1, 2018 by melissabirdwell

This particular morning was a bit of a shit show. Not a “scream at the kids because they won’t put shoes on, end up late for school and realize I’ve forgotten the backpacks” level shit show thankfully, though those mornings happen. Mostly the kids just required my full attention this morning. We were at school on time with no screaming from mommy, but I 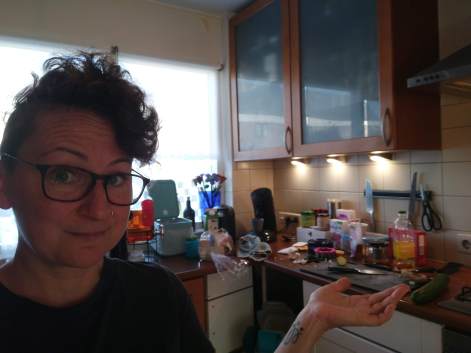 wasn’t able to do anything else I normally do. I came home from drop off to a disaster of a kitchen, night clothes scattering the floor and the contents of yesterdays backpack on the table.

I also had the very annoying realization that I had nothing ready for dinner and I would have no time to prepare anything. I had agreed to represent Eindhoven News at the Eindhoven Library on Thursdays so my day was full.  I had a parent teacher conference after school and I spoke at a Braincandies event later. I had about an hour in between to get the kids settled and fed and make myself look presentable. So that left me with about an hour this morning to get things sorted.

I’m not going lie, I kinda panicked. My first thought was premade poffertjes. Fortunately, I realized that I had everything I needed to make my sons favorite soup. He calls it the “orange soup”, and for good reason. It’s sweet potato, carrot, red lentil. and some spices. I also put in onion, garlic and the juice of half a lemon.

I don’t usually measure soups out but this morning I made a bit more of an effort because I was planning on writing this. 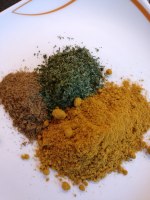 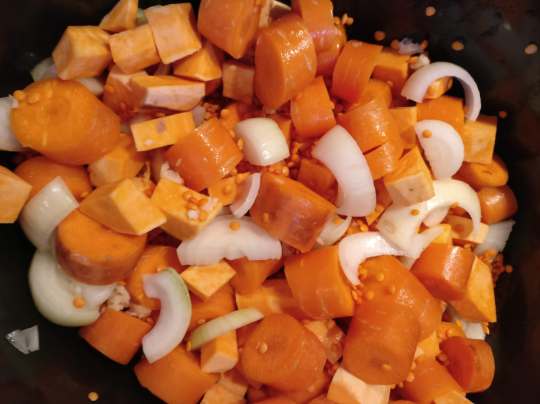 Really, don’t overthink it. It’s going to be delicious.

I cut everything up and toss it in. Cover it with water. The amount of water takes some getting used to because if you don’t put in enough the vegetables will absorb it all and nothing will cook properly but if you add to much then it will be really thin and runny. My general rule is to add enough water to cover everything and then about an inch on top. If you have the opportunity to check in on it during the day you can always add more water if needed.

As for seasoning I like to use a curry powder. For some reason when I think red lentils curry powder goes with it naturally. No clue why, but it works. I also add cumin and coriander. Lots of salt. I don’t add to much of each because my son doesn’t like foods that taste of much. He generally likes things pretty bland. I always have extra salt and hot sauce on hand. I would say about 2 tablespoons of each to start.

So what does your delicious soup look like when you come home?

Well, if you are like me on this particularly hectic day it looks raw. I, apparently, forgot to turn it on.

Luckily it’s not meat so nothing in it will get gross sitting at room temperature all day. Also luckily, kinda, the kids had parties at school and were full of cupcake so they didn’t really want dinner anyways. Fruit for dinner!!!

So I turned on the crock pot before I left for my event. Double check, yes it’s on..

I came home and the house was starting to smell amazing. I let it cook on low though the night. My crock pot will automatically switch to a “warm” mode after the preset time is up and that’s super handy.

I woke up to some amazing soup.

I used my stick blender to make sure everything was nice and smooth.

My kids have a half day Friday so we had the soup for lunch. As expected, I needed to add some salt and hot sauce. You can also add extra seasoning at the end but put it in a little at a time and give it a moment and then put more in. As my chef mentor always said, you can always add but you can never subtract.

This soup is a staple at my house. My son doesn’t like soup “with bits in” so no chunky vegetable soup for us although sometimes he will eat chili. Plus these are ingredients that I have on hand and you don’t have to be worried about amounts of anything really. More carrots, more sweet potato, regular potatos that need to get used, whatever, toss it in.  This literally takes me about 10 minutes to get ready. It’s going to cook all day and get blended later so you can leave everything in big chunks so it is super quick with little clean up. Week night dinner for the win! 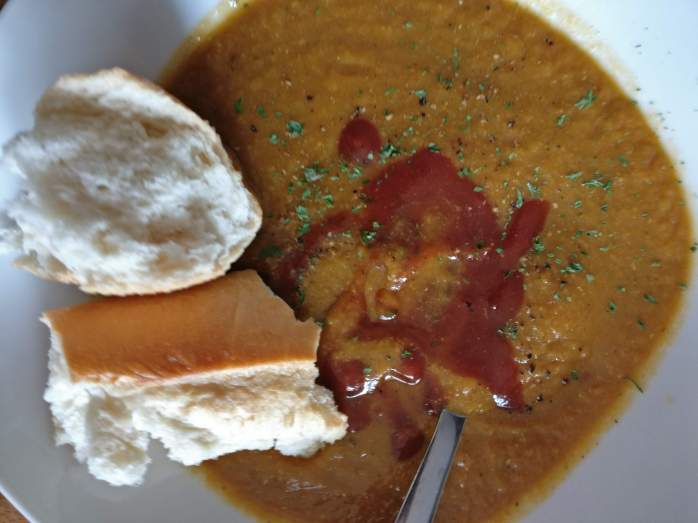 The joy of play dates.... The kids are entertained, the tv is off and I'm sitting in my favorite spot reading a book!! #themesswillwait #playdate #mommytime #momeindhoven
I've been sick all week but I woke up today feeling so freaking hungry! It's a good sign that I'm on the mend! I still have less energy than I would like so it's crock pot to the rescue. Vegetable Curry is just what I need to get going again after a week of the flu. #slowcooker #crockpot #curry #vegan #thebestmedicine #momeindhoven
I'm pretty sure this is the fastest meal ever. Miso, soy sauce, a bag of pre cut veggies and noodles. The kids are excited and it was ready in 10 minutes. #weeknightdinner #soupisthebest #happykids #momeindhoven
What's everybody reading? #imageek #historyforthewin #smallpox #momeindhoven
When your split pea soup game is on point you show off a bit!!! For those of you not familiar with Dutch split pea soup, it's meant to me so thick that the spoon stands up on its own. Done! #dutchwinters #comfortfood #vegansoup #splitpeasoup #Netherlands #dutchstyle #MoMeindhoven
Nothing like a warm bowl of goodness on this cold day. Vegan #slowcooker #chili with #vegancheese and #avocado . Meal prep for the win!!! #workingmom #brownbaglunch #lunchprep #planningforthewin #MoMeindhoven