Kings Day or Koningsdag: The Netherlands 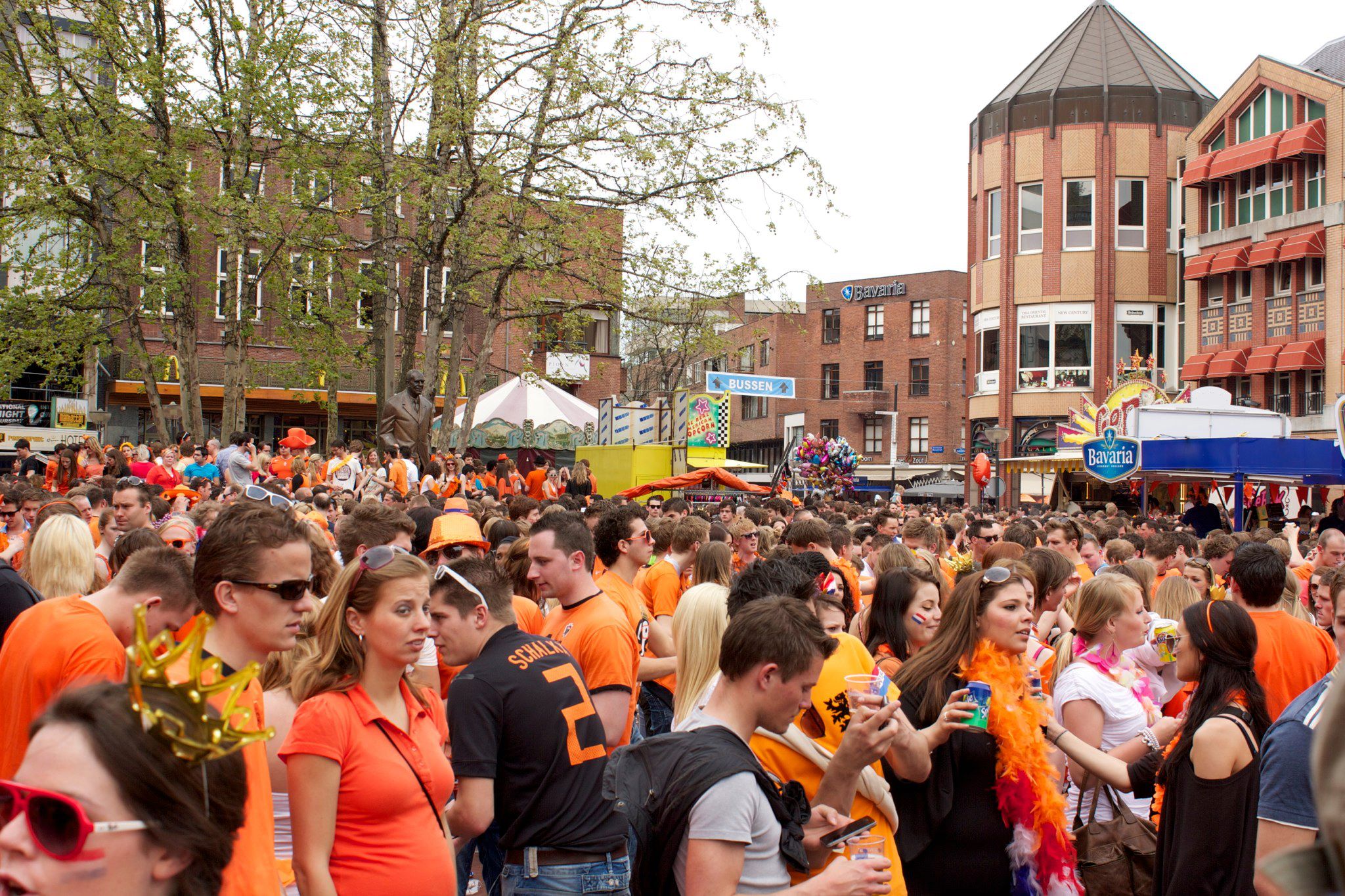 Kings Day is probably the most confusing holiday in the Netherlands. There is no rhyme or reason to it that I can find. It’s is pretty much whatever you want it to be.

Feel like sorting through all your old crap and sitting outside haggling with some of the cheapest people on the planet? This, my friend, is your day.

Fancy getting a bargain on some old rickety furniture and kids clothes? Welcome to Kings day, friend!

Is your favorite color orange and fantasize about covering yourself in it from head to toe? You are in the right place!

Enjoy day drinking without any form of social judgment? Pull up a chair!

Tired of being the only one getting blackout drunk while walking the streets of the local city singing horrible music loudly in the middle of the afternoon? Brother, today you aren’t alone!

Not that long ago (in a land far, far away. wait. nope) Kings day was Queens day. Wait. What? This holiday is so confusing that it’s hard to keep track of what it’s even called. Just to spice things up it’s even on a different day, now. One of the great joys in Dutch life is laughing at the tourists with an old guide book. How can you spot them? They show up in Central Station Amsterdam on the wrong day wearing all orange. Then they stand there in their little huddle, confused as hell and consulting the outdated guide book that started all the trouble in the first place. Pro tip, buy a new guide book. It’s worth the 10 Euros not to look like an idiot.

Some background: It was first Princess Day and then that Princess became queen and the name was changed to Queens day. The official date of the holiday shifted as Queens came and went until 1949 when Juliana took the throne (I always love that saying. I picture someone running down the street carrying a chair over their head) and it settled on April 30th. There was another Queen after that named Beatrix but she decided to keep the date the same. I had a Dutch person tell me that her birthday was in the winter and who wants to get black out drunk in the middle of the afternoon in the winter? Oh wait, that’s what carnival is. So there, winter is covered. When the current King took over in 2013 the whole thing was changed from Queens Day to Kinds Day and it was moved to his birthday on April 27th. Unless of course, that the 27th falls on a Sunday. Then Kings day is shifted to the 26th.

I think everyone is pretty used to the change now but I don’t think people were thrilled about it at first. It was always perfect weather in Queens day. It was crazy, always perfect. People worried that the change would disrupt the track record. I don’t know, but there have been two rainy Kings days so I suspect the people were right.

The day begins at the crack of dawn with people setting up tables and laying down blankets so they can have a clear out. There are designated places for this in every city. It’s not free, if you want to sell your old crap you have to reserve a spot ahead of time. It’s like a giant flea market. It’s a lot of fun, if you are into that sort of thing. I always look for plastic “outside toys” for the kids. One year I found a good sized multilevel garage with attachable road that the kids have been playing with for years. It lives in the back yard and when it has reached the end of it’s life I will recycle it and all will be fine. I’ve found some nice kids clothes in the past as well.

There is always lots of music and food and things for the kids to do. Our little village generally has a bouncy house and a small petting zoo. One year there was a non profit organization giving away plates of cut up fruit. I’m almost totally Dutch now so the idea of getting anything free is super exciting. The Kings day market combines the three things Dutch people love most in the world: day drinking, trying to get a bargain and deep fried snacks served from a truck.

I lived in The Netherlands for YEARS and never knew there was a market. Before I had kids I was much more interested in the other side of Kings day. Bring on the day drinking!!

You see, I live in Eindhoven and there isn’t a market in the city center. We would take the bus into town early afternoon and meet friends for a few drinks (and then a few more most likely). There are stages set up in the open areas with bands or DJ’s playing. Everything is festive and fun.

And you have to wear orange. Not just any orange, though. It’s a very specific orange and wearing the wrong color, although not punishable by death or anything, is just as bad as not wearing orange at all. Just find a HEMA and you will be sorted. Trust me, you won’t have any problem finding something to wear.

I think that about covers Kings day. Think about it like Carnival. Take it for the weirdness it is and enjoy. And don’t forget cash.

← Keukenhof, The Netherlands
An Open Letter to Groningen →

The joy of play dates.... The kids are entertained, the tv is off and I'm sitting in my favorite spot reading a book!! #themesswillwait #playdate #mommytime #momeindhoven
I've been sick all week but I woke up today feeling so freaking hungry! It's a good sign that I'm on the mend! I still have less energy than I would like so it's crock pot to the rescue. Vegetable Curry is just what I need to get going again after a week of the flu. #slowcooker #crockpot #curry #vegan #thebestmedicine #momeindhoven
I'm pretty sure this is the fastest meal ever. Miso, soy sauce, a bag of pre cut veggies and noodles. The kids are excited and it was ready in 10 minutes. #weeknightdinner #soupisthebest #happykids #momeindhoven
What's everybody reading? #imageek #historyforthewin #smallpox #momeindhoven
When your split pea soup game is on point you show off a bit!!! For those of you not familiar with Dutch split pea soup, it's meant to me so thick that the spoon stands up on its own. Done! #dutchwinters #comfortfood #vegansoup #splitpeasoup #Netherlands #dutchstyle #MoMeindhoven
Nothing like a warm bowl of goodness on this cold day. Vegan #slowcooker #chili with #vegancheese and #avocado . Meal prep for the win!!! #workingmom #brownbaglunch #lunchprep #planningforthewin #MoMeindhoven